DVCMS is pleased to have finished its 5th season successfully (and be in the black as well).

Several of our board members have stepped down at this season's close, each having served for several years to the series' benefit. We will therefore be on sabbatical for the 2013-2014 concert season. We look forward to continuing the series with some additional volunteers next year. 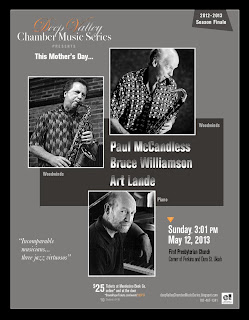 When: Sunday, May 12, 2013 at 3pm
Where: First Presbyterian Church in Ukiah (corner of Perkins and Dora).

Jazz for Spring Afternoon
On Sunday, May 12 Deep Valley Chamber Music Series will offer a perfect way to celebrate Mother’s Day or relax on a spring afternoon.
Paul McCandless will be joined by pianist Art Lande and woodwind artist Bruce Williamson for a free-flowing afternoon of both classic and modern jazz.

With a distinguished career spanning over three decades, Paul McCandless brings a soaring lyricism to his playing and composing that has been integral to the sound of two seminal world music bands, the original Paul Winter Consort and the innovative quartet, Oregon. A gifted multi-instrumentalist and composer, he specializes on the oboe, English horn, bass clarinet, soprano and sopranino saxophones and a collection of folk flutes reflecting his grounding in both classical and jazz disciplines. The winner of three Grammies, he has performed on over 200 albums and contributed to numerous film scores.  As an orchestral soloist he has performed with the Camerata chamber orchestra of Mexico City, St Paul chamber orchestra, and the Philadelphia, Buffalo, Los Angeles, Stuttgart and Ukiah symphony orchestras.

Grammy-nominated Art Lande is an internationally known pianist, composer, improviser, drummer and educator who has performed with a long list of the Who's Who in jazz, including Joe Henderson, Woody Shaw, Bobby Hutcherson, Steve Swallow, Charlie Haden, Kenny Wheeler, Sheila Jordan, Mark Isham,  Jan Garbarek and many others.

Multi-instrumentalist Bruce Williamson has performed in blues and Brazilian bands in San Francisco and New York.  He has worked with jazz artists such as Mark Levine, Bobby McFerron , Benny Green, Art Lande, Mark Isham, Jimmy Smith, Stanley Turrentine, George Benson and others.  Recently, he has performed with his own groups in various New York City clubs and has been a featured soloist in Japan and Europe.  Bruce can be heard on more than fifty recordings playing saxophones, clarinet, bass clarinet, flute, piccolo, piano and synthesizer.

Tickets are $25 ($10 students 8-18), available at Mendocino Book Co and at www.brownpapertickets.com.

The Schubert C major Quintet is a truly outstanding work. It was composed in the summer of 1828, just two months before the composer's death. It is a work considered by many to be one of the greatest compositions in all of chamber music literature. 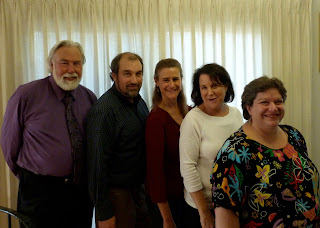 The Yokayo Chamber Players, a group assembled by Joel Cohen, takes its name Yokayo from the local native-American term for that beautiful, deep valley formed by the Russian River as it passes through the space now known as Ukiah, in Mendocino County, CA.

General Admission is $25. Youth tickets ($10) available at the door.
Advance tickets can be purchased at Mendocino Book Company, and online at brownpapertickets. 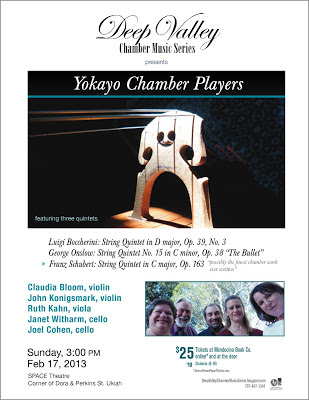